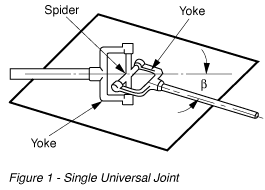 A universal joint is a positive, mechanical connection between rotating shafts, which are usually not parallel, but intersecting. They are used to transmIt motion, power, or both.

The simplest and most common type is called the Cardan joint or Hooke joint. It is shown in Figure 1. It consists of two yokes, one on each shaft, connected by a cross-shaped intermediate member called the spider. The angle between the two shafts is called the operating angle. It Is generally, but not necessarily, constant during operation. Good design practice calls for low operating angles, often less than 25°, dependIng on the application. Independent of this guideline, mechanical interference In th e construction of Cardan joints limits the operating angle to a maximum (often about 37½°), depending on its proportions.

Universal joints of special construction, such as ball-jointed universals are also available. These are used for high-speed operation and for carrying large torques. They are available both in miniature and standard sizes.

3.0 General Characteristics of the Cardan Joint


A basic characteristic of the Cardan joint is the nonuniformity of motion transmission through the joint. The angular-velocity ratio between input and out put shafts varies cyclically at two cycles per revolution of the input shaft. This fluctuation, which is accompanied by corresponding angular accelerations, increases with the operating angle and can be as much as 15% of peak angular velocity (in the case of a 30° operating angle). In selecting a joint the effect of these fluctuations on static torque, inertia torque and system performance needs to be kept in mind.

The non uniformity of the transmission can be eliminated by using two appropriately phased universal joints in series, as shown in Figure 2. In such cases the velocity variation induced by one joint can be made to cancel that of the ot her, thereby transmitting a constant (1:1) angular velocity ratio between shafts. The angular velocity fluctuation of the intermediate shaft, however, cannot be avoided. Two universal joints in series also permit coupling of two laterally displaced shafts (single Cardan joints are limited to intersecting shafts).

They have the following disadvantages: 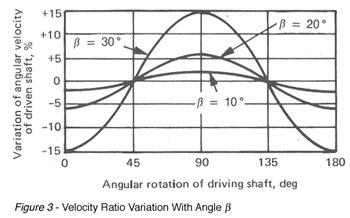 The peak displacement lead (or laq). peak angular-velocity ratios (max. and min.) and peak angular-acceleration ratios are shown as a function of operating angle in Table 1, which is reproduced from "The Analytical Design of Universal Joints" by S.J. Baranyi, Design News, Sept. 1, 1969.

The table should always be consulted for exact numerical values. As a qualitative guideline, it may be kept in mind that for small operating angles (say up to 10°), the angutar-displacement error (max. lead or lag), the deviation of the max. and min. angular velocity ratios from unity, and the maximum angular acceleration ratio are very nearly proportional to the square of the operating angle.

The inertia loading often determines the ultimate limit on the speed of operation of the joint. Recommended speed limits vary depending on operating angle, transmitted power and nature of the applicatlon. Recommended peak angular accelerations of the driven shaft vary from 300 rad/sec² to over 2000 rad/sec² in power drives. In light instrument drives, the allowable accelerations may be higher. For an accurate determination of allowable speed, a stress determination is necessary.


A universal joint operates at 250 RPM with an operating angle of 10°. Find the max. angular displacement lead (or lag), max. and min. angular-velocity of output shaft and max. angular acceleration of output shaft. If the system drives an inertia load so that the total inertial load seen by the output shaft (including its own inertia) can be represented by a steel, circular disc attached to the output shaft (radius r = 3", thickness t = 1/4"), find the max. inertia torque of the drive. From Table 1 with (ß = 10°, the max. displacement lead (or lag) = 0.439° = 26.3'. The max. and min. angular-velocity ratios are given as 1.0154 and 0.9848, respectively. Hence, the corresponding output-shaft speeds are: 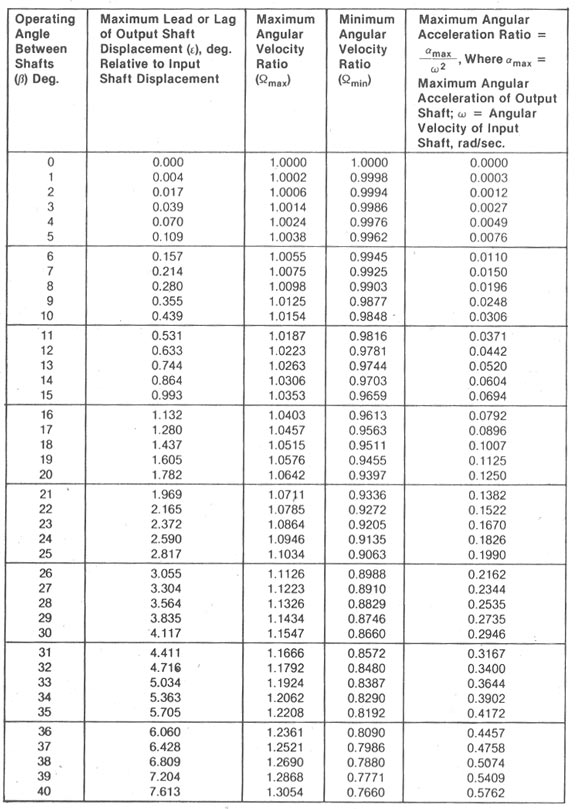 *Reproduced with the permission of Design News from "The Analytical Design of Universal Joints" by S.J. Baranyi, Design News, Sept. 1, 1969.

According to Table 1, the max. angular acceleration ratio is 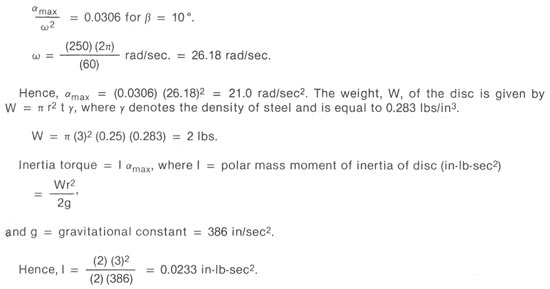 When system vibrations and resonances are important, it may be required to determine the harmonic content (Fourier series development) of the output shaft displacement as a function of the displacement of the input shaft. The amplitude of the mth harmonic (m > 1) vanishes for odd values of m, while for even values of m it is equal to (2/m) (tan1/2 ß)m, where ß denotes the operating angle.


The capacity of a universal joint is the torque which the joint can transmit. For a given joint, this is a function of speed, operating angle and service conditions. Table 2 shows use factors based on speed and operating angle for two service conditions: intermittent operation (say, operationl or less than 15 minutes, usually governed by necessity for heat dissipation) and continuous operation. The torque capacity of a single Cardan joint of standard steel construction is determined as follows:

i. From the required speed in RPM, operating angle in degrees, and service condition (intermittent or continuous), find the corresponding use factor from Table 2.
ii. Multiply the required torque, which is to be transmitted by the input shaft, by the use factor. If the application involves a significant amount of shock loading, multiply by an additional dynamic factor of 2. The result must be less than the static breaking torque of the joint.
iii. Refer to the torque capacity column in the SOP catalogue and select a suitable joint having a torque capacity not less than the figure computed in (ii), above. If a significant amount of power is to be transmitted and/or the speed is high, It is desirable to keep the shaft operating angle below 15°. For manual operation operating angles up to 30° may be permissible.

TABLE 2 Use Factors for the Torque Rating of Universal Joints


A single universal joint is to transmit a continuously acting torque of 20 in-lbs, while operating at an angle of 15° and at a speed of 600 RPM. Select a suitable joint. From Table 2 for continuous operation, the use factor is given as 68. Note that there are blank spaces in the table. If the combination of operating angle and speed results in a blank entry in the table, this combination should be avoided. The required torque Is (68)(20) = 1360 in-Ibs. There is no shock load and the dynamic factor of 2 does not apply in this case.

From the catalogue, it is seen that there are two joints meeting this specification: 508-0500 and 508-0516, both with a torque capacity of 1700 in-lbs. The first has a solid-shaft construction and the second a bored construction. The choice depends on the application.


A single universal joint is to transmit 1/4 horsepower at 300 RPM at an operating angle of 15°. Select a suitable joint for Intermittent operation with shock loading. Here we make use of the equation:

5.3 Example 4: Determining the Maximum Speed of an Input Shaft


A universal joint is rated at 250 in-lbs, and operates at an angle of 12°. driving a rotating mass, which can be represented (together with the inertia of the driven shaft) by a steel, circular disc, radius r = 6", thickness t = 1/2", attached to the driven shaft. How fast can the input shaft turn if the inertia torque is not to exceed 50% of rated tourque?

Hence, if the inertia torque is not to exceed its limit, the max. speed of the input shaft is 588 RPM. For joints made with thermoplastic material, consult the catalogue, which contain design charts for the torque rating of such joints.


In designing support bearings for the shafts of a Cardan joint and in determining vibrational characteristics of the driven system, it is useful to keep in mind the so-called secondary couples or rocking torques, which occur in universal joints.

These are rocking couples in the planes of the yokes, which tend to bend the two shafts and rock them about their bearings. The bearings are thus cyclically loaded at the rate of two cycles per shaft revolution. The maximum values of the rocking torques are as follows:

where Tin denotes the torque transmitted by the input shaft and ß the operating angle. These couples are always 180° out of phase. The bearing force induced by these couples is equal to the magnitude of the rocking couple divided by the distance between shaft bearings.

It has been observed also that due to the double frequency of these torques, the critical speeds associated with universal drives may be reduced by up to 50% of the value calculated by the standard formulas for the critical speeds of rotating shafts. The exact percentage is a complex function of system design and operating conditions.


As mentioned in paragraph 3, universal joints can be used in series in order to eliminate velocity fluctuations, to connect offset (non-intersecting) shafts, or both. Figure 2 shows a schematic of such an arrangement.


In order to obtain a constant anqular-velocity ratio (1:1) between input and output shafts, proper phasing of the joints is required. This phasing can be described as follows: two cardan joints in series will transmit a constant angular-velocity ratio (1:1) between two intersecting or non-intersecting shafts (see Figure 2), provided that the angle between the connected shafts and the intermediate shaft are equal (ß = ß') and that when yoke 1 lies in the plane of the input and intermediate shafts, yoke 2 lies in the plane of the in terrnedtate shaft and the output shaft.

If shafts 1 and 3 intersect, yokes 1 and 2 are coplanar. When the above phasing has been realized, torsional and inertial excitation is reduced to a minimum. However, inertia excitation will inevitably remain in the intermediate shaft 2, because this shaft has the angular acceleration of the output shaft of a single universal joint (the first of the two joints in series). It is for this reason that guidelines exist limiting the max. angular acclerations of the intermediate shaft. Depending on the application values between 300 rad/sec² and values in excess of 1000 rad/sec² have been advocated. In light, industrial drives the allowable speed may be higher. For an accurate determination of allowable speed, a stress determination is necessary.

7.2 Example 5: Determining the Maximum Speed of an Input Shaft in a Series


In a drive consisting of two universal joints in series, phased so as to produce a constant (1:1) angular velocity ratio between input and output shafts, the angle between the intermediate shaft and input (and output) shaft is 20°. If the max. angular acceleration of the intermediate shaft is not to exceed 1000 red/sec², what is the upper limit of the speed of the input shaft?

Hence, the speed of the input shaft should not exceed 854 RPM, When the joint angle is less than or equal to 10°, Table 3 can be used as an alternative. 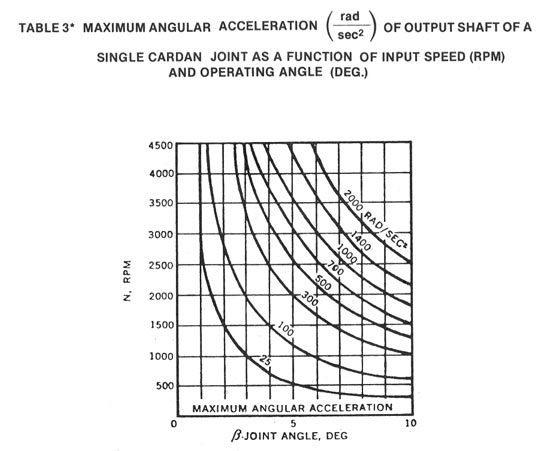 *Reprlnted with the permission of Penton Publishing Co. from "Cardan Type Universal Joints" by T,A. Kayser; 1975-76 Power Transmission and Bearing Handbook, p. A232,